The Ocean Race discovers microfibres are rife in Europe’s seas

● Microfibres were found in every sample taken by sailors this summer
● The Baltic Sea was found to have the highest levels of microplastics in Europe, double the amount in the Mediterranean
● The impact of the climate crisis on Europe’s seas was also measured 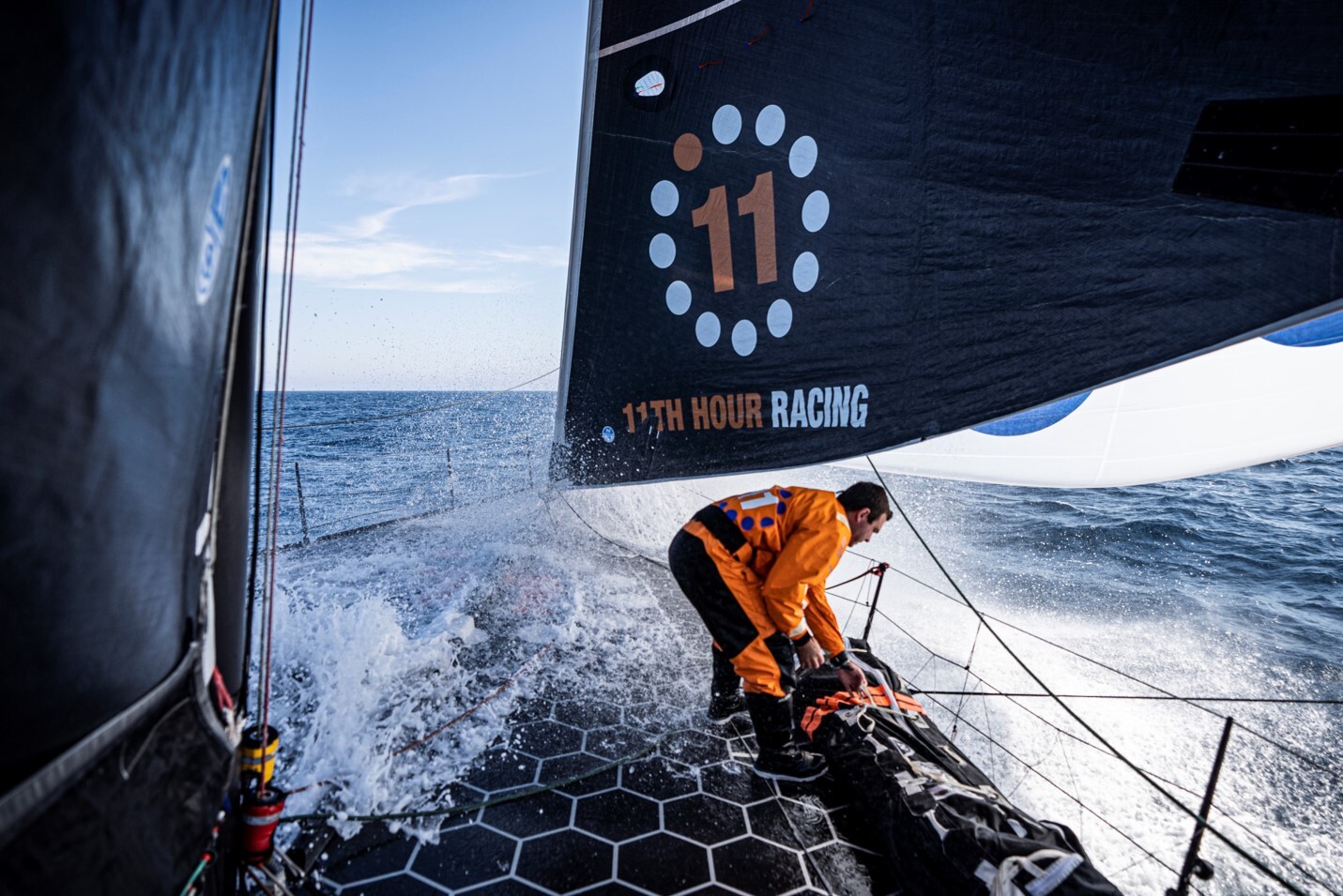 New research from the world’s toughest sailing race has found microplastics, and in particular microfibres, to be prevalent across the length and breadth of the continent.

All 36 water samples collected around Europe, including in the Baltic Sea, the English Channel, along the Atlantic coastline and in the Mediterranean Sea, were found to contain microfibres - tiny plastic fibres that enter the environment from manufacturing, washing and wearing synthetic clothes. Fibres also originate from car tyres(1), ending up in the sea after heavy rain and run-off, and fragmented fishing gear and lines.

The data, which was captured by sailing teams competing in the first edition of The Ocean Race Europe, found, on average, Europe’s seas contain 139 microplastic particles per cubic meter. 83% of these particles are microfibres, with the remaining being fragments from the degradation of larger plastic items such as plastic bottles, packaging and microbeads in toiletries. Three of the samples (two from the Channel and one from the Mediterranean Sea) contained microfibres exclusively.

The Ocean Race measured microplastics in the last edition of the round-the-world Race in 2017-18 in a pioneering move that combined racing and science. This summer, the Race sought to go a step further and team up with scientific bodies, GEOMAR Helmholtz Centre for Ocean Research Kiel and Utrecht University, to discover more about the source of the microplastics by analysing whether they are fibres or fragments.

Dr. Aaron Beck Senior Scientist at GEOMAR Helmholtz Centre for Ocean Research Kiel, who coordinated the analysis of the microplastic samples, said: “The data clearly show that microplastics are pervasive in the ocean and that, surprisingly, the major component of these microplastics are microfibres. Previous research has typically focused on detecting fragments, rather than fibres, so this new data is significant and highlights the value of collaborations with partners like The Ocean Race that help us better define the make-up and distribution of microplastics in the surface of the ocean.”

Data from the race is contributing to the development of a map of plastic in the ocean and helping inform understanding of how microplastics transfer into marine ecosystems. Microfibres are the type of microplastic that are most frequently eaten by marine species(2) and therefore of concern for ocean biodiversity.

The Ocean Race Europe took place in May and June 2021, starting in Lorient in North West France and finishing in Genova, Italy. Data was collected over a six-week period, which included the race and a prologue event, in which boats departed from Klaipeda, Lithuania and sailed across Northern Europe and through the Channel to the Race starting point.

The data gathered in the Race showed the Baltic Sea to have the highest levels of microplastics in Europe on average, with 230 particles found per cubic metre, double the amount found in the Mediterranean (112 particles per cubic metre), which is considered a hotspot for plastic pollution.

Dr. Aaron Beck Senior said: “The high abundance of microplastic in the Baltic Sea compared to the Mediterranean Sea is unexpected. Factors, such as the time of year that the data is collected, can have an impact on the distribution of microplastics. The more data we can gather, from different areas and seasons, the better we can understand the source of
the plastics and where they end up.”

The ocean plays a critically important role in climate regulation. It has absorbed over 90% of man-made excess heat since the 1970s(3) and absorbs a quarter of human made carbon CO2(4), helping to effectively mitigate climate change. However, this absorption causes the ocean to become more acidic, which has an adverse effect on marine life. Measurements of dissolved CO2 captured during The Ocean Race Europe by 11th Hour Racing Team have been submitted to the Surface Ocean Carbon Dioxide Atlas (SOCAT), which provides data for the Global Carbon Budget, a yearly assessment of CO2 that informs targets and predictions for carbon reduction. It is vital that scientists understand the levels of CO2 in the ocean to form an accurate budget and keep the world on track to stay within the Paris Agreement goal of limiting global warming to below 1.5 degrees Celsius.

The CO2 data were also analysed by EuroSea, a European Commission funded programme that improves the ocean observing and forecasting systems. Carbon dioxide levels were found to be highest in the Mediterranean, as a consequence of warm temperatures and very little wind. CO2 has increased a great deal during the past 200 years, and the rate of increase is accelerating.

The data gathered in the Mediterranean are incredibly useful to scientists, as the sea can be described as a ‘miniature ocean”(4). The speed of change is faster in the Mediterranean than other parts of the ocean, allowing an insight into what will happen as a result of climate change on a global scale in future.

Simon Weppe, science lead at The Ocean Race said: “Climate change and plastic pollution have, in mere decades, caused a drastic decline in the health of the ocean. Through The Ocean Race’s unique collaboration between sailors and ocean research organisations, we are helping to grow understanding of these dire issues. The more we know of the scale of these problems the better placed we are to take action to combat them; this is crucial, as the state of the seas and the fate of the planet are completely interlinked.

"It's vital that governments act on the scientific evidence to protect and restore our ocean and all that depends on it. The race for the ocean is a race we must win.”

The Ocean Race Europe scientific data collection activity was endorsed by the UN Decade of Ocean Science for Sustainable Development, a global movement to unlock the knowledge needed to reverse the cycle of decline in ocean health and create improved conditions for sustainable development of the ocean.

The Ocean Race’s innovative science programme has been developed in collaboration with 11th Hour Racing, Premier Partner of The Ocean Race and Founding Partner of the Racing with Purpose sustainability programme.

The Ocean Race Europe Science Report can be viewed here.

Sources
1. Atmospheric transport is a major pathway of microplastics to remote regions, published in Nature
2. Microplastic fibers - Underestimated threat to aquatic organisms? The Science of the total environment, Rebelein, A., Int-Veen, I., Kammann, U., & Scharsack, J.P. (2021).
3. Special Report on the Ocean and Cryosphere in a Changing Climate, IPCC
4. The oceanic sink for anthropogenic CO2 from 1994 to 2007, published in Science
5. Abrupt climate shift in the Western Mediterranean Sea. Scientific Reports, 6, Schroeder, K., Chiggiato, J., Bryden, H.L., Borghini, M., & Ben Ismail, S. (2016).

Images and an infographic of the microplastic data are available here.

About The Ocean Race

Since 1973, The Ocean Race has provided the ultimate test of a team and a human adventure like no other. Over four decades it has kept an almost mythical hold over some of the greatest sailors and been the proving ground for the legends of our sport. The last edition of the race was the closest in history, with three teams virtually tied, approaching the finish line. After 126 days of racing spread across 11 legs, the winning margin for Charles Caudrelier’s Dongfeng Race Team was only 16 minutes. The top three teams were separated by just four points. The next edition of The Ocean Race will start from Alicante, Spain next winter and will finish in Genova, Italy in summer of 2023.

Sustainability in The Ocean Race

We have a proven commitment to sustainability, and with the support and collaboration of 11th Hour Racing, Founding Partner of the Race Sustainability Programme and Premier Partner of The Ocean Race, we are inspiring action and creating tangible outcomes. Building upon our award-winning legacy in sustainability, our innovative Racing With Purpose programme is acting as a catalyst for positive change and accelerating the application of innovative solutions to help restore ocean health.

The UN Decade of Ocean Science for Sustainable Development

Coordinated by UNESCO's Intergovernmental Oceanographic Commission (IOC), the Ocean Decade provides a convening framework for scientists and stakeholders from diverse sectors to develop the scientific knowledge and the partnerships needed to accelerate and harness advances in ocean science to achieve a better understanding of the ocean system, and deliver science-based solutions to achieve the 2030 Agenda.