Indigenous knowledge in the Pacific Islands and the UN Ocean Decade

UNESCO’s Member States are gathered in Paris to study and adopt a new 8-year medium term strategy which will place greater emphasis on indigenous and local knowledge as an integral part of its strategy to achieve the Sustainable Development Goals and tackle climate change.

UNESCO’s Intergovernmental Oceanographic Commission (IOC) and the Local and Indigenous Knowledge Systems (LINKS) programme from the Natural Sciences paired up to run an online event about indigenous knowledge of the marine environment in the Pacific region. 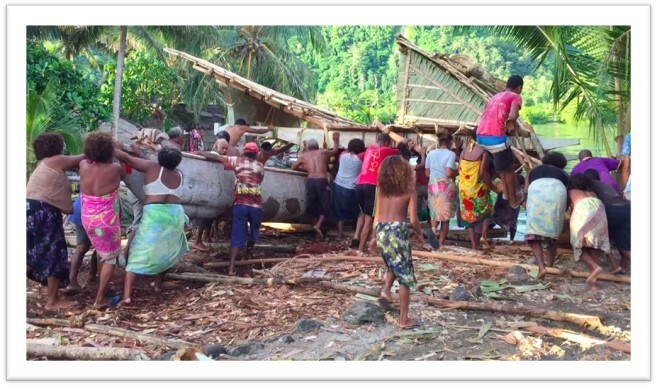 The event helped launch two new reports commissioned by UNESCO about the ancestral voyaging knowledge of Pacific islanders. UNESCO commissioned the works that provide an overview of the history, heritage and contemporary status of Pacific ancestral voyaging knowledge, and a particular focus on the knowledge and skills of women Islanders. The aim is to involve indigenous knowledge holders in key national and regional discussions on the future of the ocean, sustainable livelihoods, and promoting traditional knowledge as part of the strategy to enhance the UN Ocean Decade.

HE Peter Thomson, the UN Secretary General’s Special Envoy on the Ocean provided a video message in support of the event, drawing attention to the connection between indigenous and local knowledge and the aims of the UN Decade of Ocean Science for Sustainable Development.

“Holders of diverse knowledge systems, including indigenous and local holders will be essential to the success of this Decade.” Said Thomson. These different experts need to be brought together to assure the co-delivery of knowledge for decision-making. Thomson, himself descended from Scottish sailing heritage, marveled at the extraordinary skill of Pacific navigators, thousands of years before navigation tools were developed in the West. “Indigenous knowledge involved in those ancestral voyages is deeply humbling to those who came after” said Thomson.

The event was opened by the Assistant Director General for Natural Sciences who noted the important connection between the UN Ocean Decade and the mobilization of indigenous knowledge, including the specialized knowledge of women.

HE Ambassador Nathalie Rosette-Cazel (Cook Islands) spoke of the importance of the ocean and the heritage of navigation and voyaging for the Pacific. Rosette-Cazel, who is also the Chair of the SIDS Group at UNESCO, emphasized how the traditional canoe, or waka, is a symbol of Cook Islands development strategy and deeply tied to national identity.

“Culture and our Environment are the foundations of Pacific livelihoods and the measure of our success. Over 99% of our physical geography is ocean! For this reason, the Pacific Regional Culture Framework uses a canoe metaphor and storytelling technique to describe our journey and chart the course for where we want to be in the next 10 years. … [our priorities] include the protection and promotion of our cultural heritage, strengthening institutional mechanisms to advance culture, fostering cultural innovation for future generations, and incorporating cultural wellbeing into sustainable development.” shared Rosette Cazel.

Dr. Nigel Crawhall, Chief of Section for LINKS, introduced the panel. UNESCO has a long history in the Pacific and has worked on a range of indigenous knowledge projects in different parts of the region. With the support of the SIDS Section at UNESCO, they were pleased to have been able to commission the new reports that highlight the connection between indigenous knowledge and the Ocean Decade. He also noted, that 2022 is the start of the UN International Decade of Indigenous Languages (IDIL), a further opportunity to bring forth voices not often heard in policy spaces.

Dr Marianne ‘Mimi’ George (Hawai’i, USA), the commissioned author of the UNESCO reports, shared her perspectives on the two new reports on ancestral voyaging knowledge. She emphasized that voyaging was once at the core of Pacific economies, relationships, culture and know-how. Whereas today, there are relatively few Islanders who can use the traditional means of boat building, provisioning and navigation, those who are holders of such knowledge are located on remote islands, particularly in the Western Pacific. The Ocean Decade and these initiatives provide an opportunity for that knowledge to be valorised and the knowledge holders to be given greater support. The key message from George is that elders want to teach the knowledge to a new generation, and much of the knowledge is held by women.

George emphasized that there are numerous Pacific systems of navigation, different understandings about ocean currents, sea mammal migrations, different boat building traditions, and varied capacity to continue voyaging. Since the revival of the two hulled Hōkūle‘a in 1975, there is a new generation of Pacific voyagers and wayfinders using diverse technologies.

Ms Myjolynne Kim (Chuuk, FSM) spoke about the importance of women’s traditional knowledge, myths and technical expertise. Kim is a historian who has spent time working with rural Chuukese women on their knowledge systems, how knowledge and culture shape daily life and how it is transmitted in appropriate ways. Kim placed emphasis on the need for being fully inclusive and reaching out to those on islands not connected by electricity and internet.

Kim spoke about the prejudices regarding women and navigation. George’s work has documented the heritage of women navigators and traditional mythic heroines. Kim affirmed this, recounting the Chuukese tale of how a woman joined a voyaging canoe, and the men turned on her, saying it was bad luck to have a woman aboard. The only old man on the boat warned the young men not to be rash, and to remember that the woman had family. The woman was thrown overboard and left to drown, but her sons, two sharks, not only saved her but hunted down the voyagers, sparing only the old wise man.

The Assistant Director General for the IOC, Dr. Vladimir Ryabinin, closed the meeting and thanking everyone for the valuable contributions and guidance on multistakeholder and multiple evidence-based approaches to the Decade. He thanked the speakers for the rich and informative discussion, which gave him confidence of the Ocean Decade’s capacity to mobilise diverse knowledge and stakeholders.